Contact W. Michael Farmer to purchase an autographed copy of this title 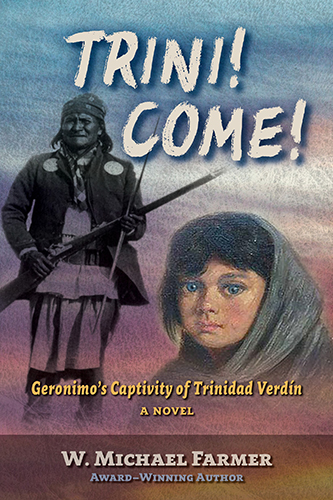 Based on an historical event

Trinidad Verdín’s story reveals the courage, suffering, and lessons a twelve-year-old girl learns about Apaches and herself during her captivity with the Naiche-Geronimo band hiding, fighting, and raiding in northern Sonora. After breaking their surrender agreement with General George Crook in late March 1886, forty Apaches (eighteen men, fourteen women, and six children) led by Geronimo established a camp at the top of the Azul Mountains in western Sonora and began raiding north. They crossed the United States border with Mexico east of Nogales, Arizona, stole horses from the village of Calabasas and on the morning of April 27, 1886 attacked the Artisan and Petra Peck Ranch about eight miles northwest of Nogales. They killed pregnant Petra and her two-year-old son Andy and were about to kill her niece, Trinidad, when Geronimo decided to spare the child and took her captive. Later that day Geronimo also let Artisan Peck live after he was taken while branding cattle.

Contact W. Michael Farmer
to purchase an autographed
copy of this title.

The Apaches carry Trinidad east deep into the Pinito Mountains where she witnesses an ambush of black soldiers before Geronimo leads the band back west to the Cibuta Mountains where they are attacked by Mexican militiamen who are mostly Tohono O’odham Indians. The Tohono O’odham militia suffer a humiliating defeat at the hands of the Apaches who show them Trinidad, challenging them to come take her. Instead the militia run away.

The Apaches return east and establish a camps on the Río Santa Cruz and in the Cocóspera Mountains while they raid for livestock and fight US Cavalry. Trinidad becomes friends with a boy, Garditha, near her age who teaches her to use a sling. She helps him learn Spanish; he helps her learn Apache. While practicing with their slings they are attacked by three vaqueros who want the boy’s scalp for Apache scalp reward money, but Trini and Garditha drive the attackers off. Geronimo later leads the vaqueros into a trap using Trini for bait.

With the U.S. Cavalry hot on their trail, the Apaches split into three bands, the smallest being Geronimo’s that includes Trini, and plan to reunite about a hundred miles southeast at the confluence of the Yaqui and Aros rivers. While going up the Río Dolores, Geronimo’s band is attacked by Mexican militia. Geronimo tries to escape with Trinidad behind him but his horse stumbles and they are both thrown off. Trinidad uses the fall as an opportunity to escape to the Mexican militia led by Don Patricio Valenzuela. After giving her story to the U.S. Cavalry led by Captain Lawton and Mexican authorities, her uncle Artisan returns her back to Nogales.